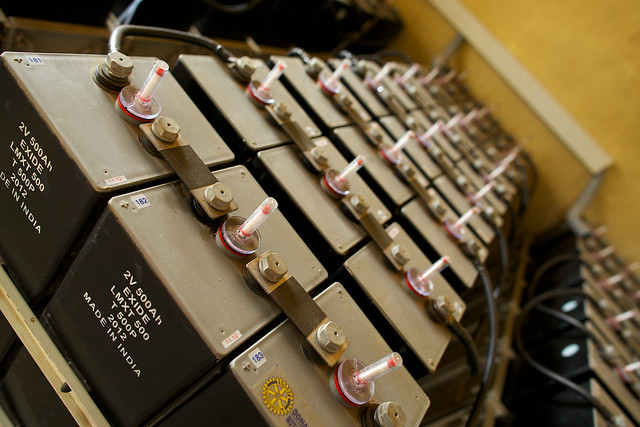 One challenge of moving to a future where we get all of our energy from renewable sources is that wind and solar are intermittent, meaning they only make electricity when the sun is out or when it the wind is blowing. Other forms of renewables, such as biomass and geothermal are not intermittent. They can make electricity anytime we want it. But it seems likely that wind and solar will have to provide the majority of our electricity in a 100% renewable energy future. So, what to do about the intermittency problem?

The daily storage challenge can be met with batteries, which are already affordable and widely available. Utilities across the states — and further abroad —  are installing battery storage systems today. Even here in New Hampshire this is happening now.

[New Hampshire Public Radio] Eversource is planning to build a battery, for $7 million – with an estimated long-term savings of $2 million for all the company’s New Hampshire customers. This battery is not designed to support renewable energy, but to provide electricity to the town during blackouts. Due to improvements in batteries, utilities can buy large batteries that store impressive amounts of energy. The batteries being installed in Westmoreland can provide power to the entire town for up to four hours in the event of an outage.

[Concord Montitor] Liberty Utilities will subsidize the cost of between 100 and 200 Tesla Powerwall batteries to be installed in customers’ homes as a test of how well they can be used by Liberty to help cope with peak loads, such as on hot summer afternoons. Utilities need to learn how to use batteries like these as we move to a 100% renewable future. Liberty is not the first utility to install batteries in people’s homes, but we are excited to see this technology coming to New Hampshire.

Managing the intermittency problem in homes or towns is one thing, but managing it for a city, state, or country is another. Much is happening. We were inspired by this story from Scotland about the installation of a huge battery system that will manage regional wind generation and make electricity available even when the wind doesn’t blow.

Inspiration from across the pond

Scotland is moving the renewable energy revolution forward, but it’s not the first to do large scale batteries. Two years ago, Australia installed a giant Tesla battery to ensure electricity was available to the entire grid, even when the wind farms were not generating electricity.  Experience has shown the battery works as expected and is saving tremendous amounts of money for Australian consumers. Watch this 2-minute video from ABC News Australia to learn more about their experience.

Could we do it here?

Can Keene have 100% renewable energy? Yes, but no one is expecting this to happen overnight. The resolution passed by the City Council gives us until 2030 to accomplish this goal. We will need the partnership of Eversource. But more important than that, the people who live in Keene have to decide what kind of future they want and demand it.